The waters of the Arkansas River in the Tulsa area are rapidly falling. The waters flowing into Keystone Dam above the city declined rapidly which gave room for the Army Corps of Engineers to start closing the big Tainter gates and reduce the water drastically.

Downstream of Tulsa things are still bad, Muskogee still has a lot of flooding, and it is even worse in Arkansas where a major levee has been breached.

The images above and below are screen shots from a Corps web site. People had them open on their screens all day, refreshing and posting what the latest inflow and outflow numbers were.

I think that this has been a wake up call for the whole community. Personally, I thought with a big dam upstream that a major flood was pretty much impossible. Well, it is possible and we were lucky that the levees held and that the rains held off. With the climate change we are experiencing I am wondering if we are going to see these occurrences more often.

The local paper, the Tulsa World, produced the video above and the links I reference below.

An oil and gas producer who had tanks flooded mishandled the situation and ended up in hot water. Read about it here.

The waters are lower and residents are starting to return to their homes.

The Tulsa World also has a listing of handy phone numbers and internet links that might be helpful. 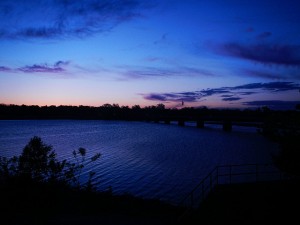 It has warmed up considerably so I am running on the Arkansas River Trails in the morning. It is hard to make time running and then stopping to take photographs.

Last Friday afternoon the family went to the Blue Rose on the Arkansas to have a late lunch. 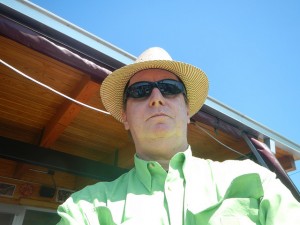 Fresh from my brush with skin cancer I had my SPF50 and fancy hat on. 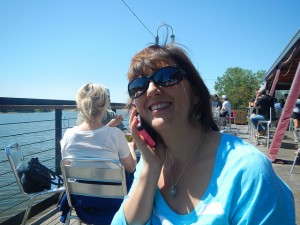 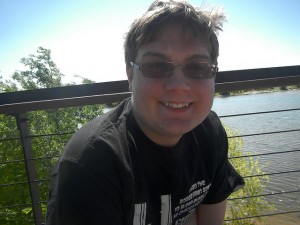 And Logan, he was wanting to know when his burger was going to show up. I kept wondering why he wasn’t in school. 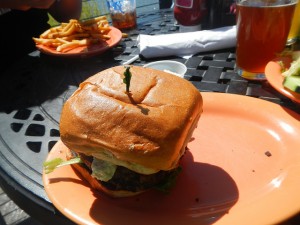 Here is mine, burger, bacon, blue cheese. Yeah baby, and I didn’t share. 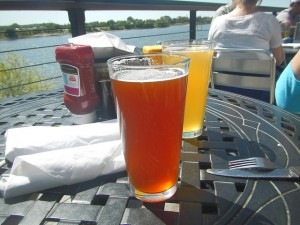 And a couple of adult malted beverages. Don’t worry about Logan he had a soft drink.

Such was the scene on the first real sunny, really warm day of the year last week. It felt really good to be warm and in the sun right on the river.

What did you do on your first real sunny, really warm day of the year? 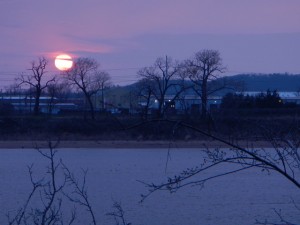 Sunset over the Arkansas River. 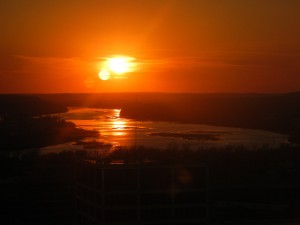 Another photograph of the sunset from my old office. I know that I had a similar photograph last week but hey I’m doing it again. The “second” sun left of the “real” sun is is a reflection from window that I am taking the picture through.

The season for these kind of shots is coming to a close when daylight savings time starts. I love the sunset shots but I already work until six. I’ll have to get out and find something else to take pictures of until late Fall. 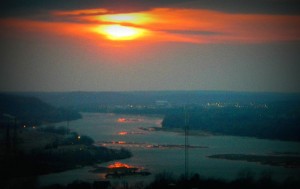 Last summer my space at work was moved from a cubicle with a grand view to a very nice office with four beige walls. Every once in a while toward the end of the day I sneak back into my own cubicle and snap a pic or two. I hope that I don’t get in trouble! My favorite views are when the sun lines up with the Arkansas River and there are reflections in the water like the view above last Tuesday night.

Do you have a favorite place to take photographs? 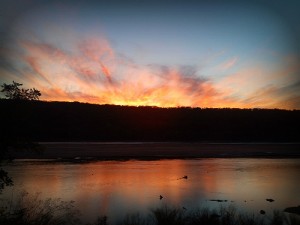 The view west from the east side of the Arkansas River in Tulsa  Wednesday evening. I love a little Fall color in the sky and on the river. 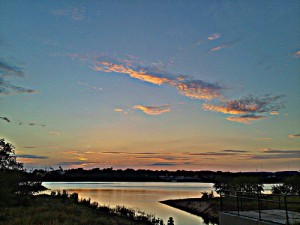 It is the middle of September and summer is hanging on and not letting go. It was over 90 and humid on Wednesday. I’m still training for the Tulsa Run 15K in late October and maybe the Route 66 Half Marathon in November. Last night I ran eight miles along the River Parks trails here in Tulsa.

I’m a very slow runner. In fact I would have to speed up to be slow but I don’t have any time goals in mind for the races. My goal is to finish vertically. Training on the next to the river is very peaceful and it easy very easy to just zone out and flow with the other runners, walkers, and bicyclists. I have been running the trails for over 21 years now and just love them.

Do you have a place where you can go and just zone out? 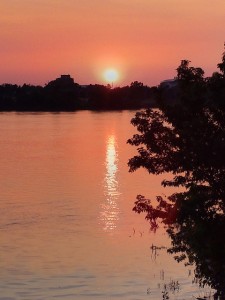 I love this time of year for a number of reasons but a big reason is that the sun is still up during my Wednesday evening “kitchen pass” run so I can run for a while and take photographs for a little while.  I’m trying to get ready for my 20th consecutive Tulsa Run 15 kilometer race in late October, plus I am going to see if I have one more half marathon in me for in November, so I’m starting to build up mileage and there is no prettier place to do that than along the Arkansas River in Tulsa.

Soon enough I’ll be running in the dark. That happens when you are as old, fat, and slow as me, but hey I’m still in race. 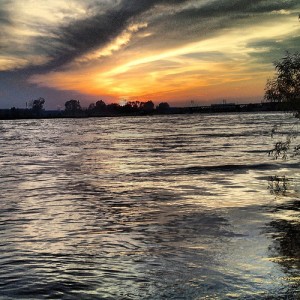 We’ve had a lot of rain in Oklahoma lately, that coupled with rain in Kansas in the Arkansas River’s drainage area has led the Corp of Engineers to increase the flow tremendously in the river downstream of Keystone Dam. The river is now running bank full and is running very fast and carrying trees and debris with it.

A few years ago during a drought I walked clear across the river bottom (it has a rock bottom) to within 30 feet of the other bank. I wouldn’t get near the water now. A few weeks ago three young men drowned near where I took this photograph.