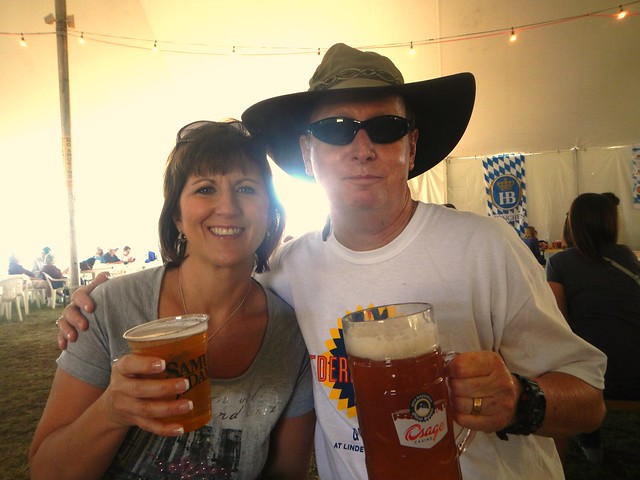 Friday,  Heather, Logan, and I headed out to the Tulsa Oktoberfest. I had run a race the night before and as part of my entry fee I got a one liter stein. And you know something those steins don’t fill themselves. I had to take it Oktoberfest so it could realize it’s inner “steinness.” If you don’t know what that means then buy my upcoming book “The Inner Life of Beer” and learn all about it. 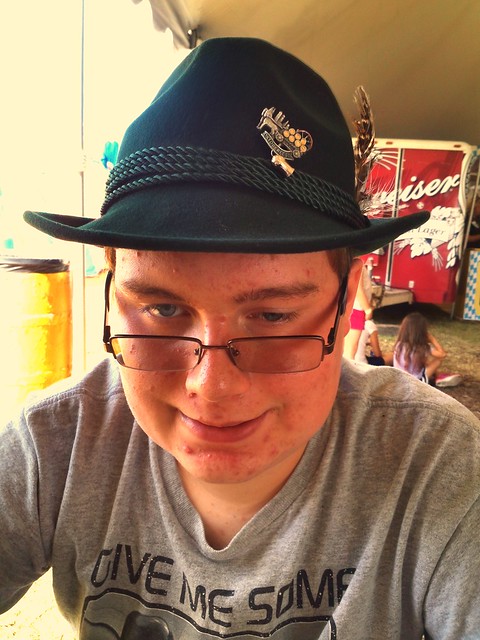 Logan is rocking his new Oktoberfest cap and pin. I think he looks great. 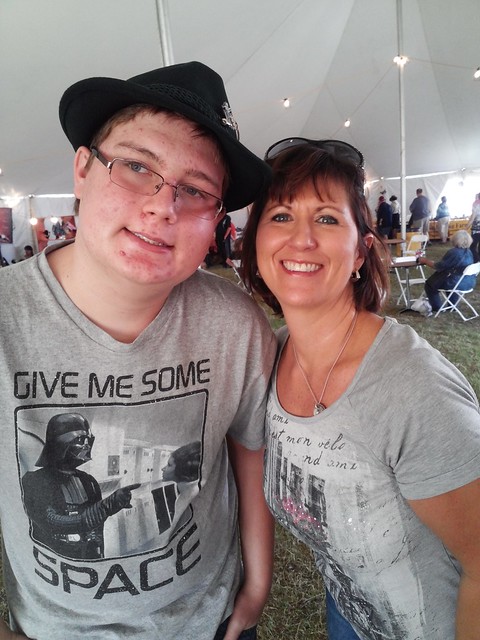 Logan and Heather make a great couple. I have no idea where he is looking. 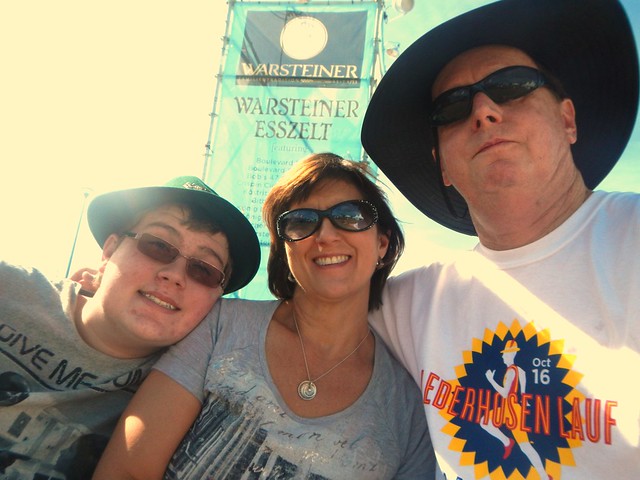 Oktoberfest has really upped its game with its beer. It used to be pretty lame but they now have a wide selection of both foreign and domestics, Warsteiner, Boulevard, Marshall Brewing, Paulaner, in addition to the crappy market leading domestics. They had a pretty good variety of food also, bratwurst, sausages, schnitzel and the rest along with typical fair food. 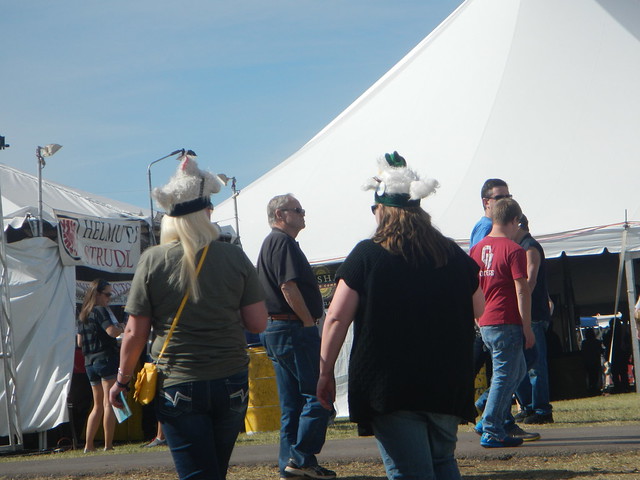 The people watching was world class with lots of people wearing chicken hats. 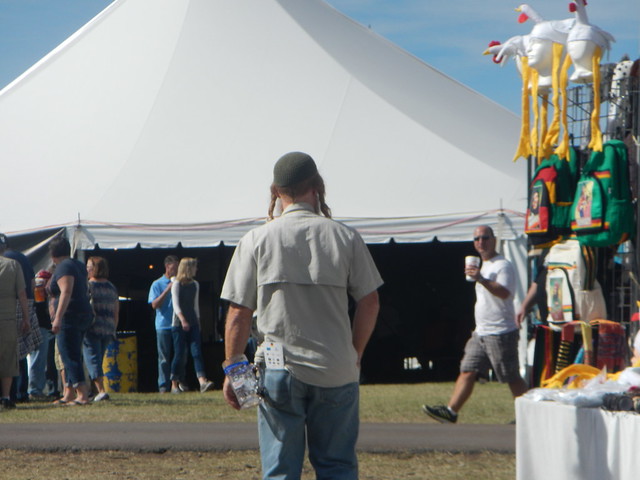 And one guy that looked like a hipster Hasidic guy.  Hey, you know, the devout have to have beer also. Notice his stein. We also had some people right out of Breaking Bad. 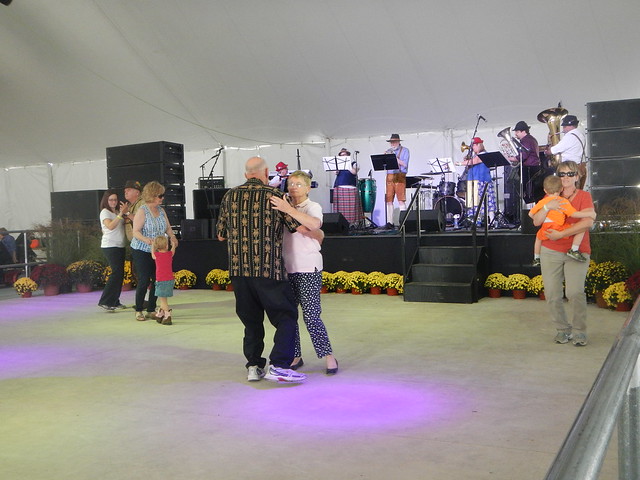 Lots of dancing going on to German music. My favorite is the cross generational type dancing.

I think that a smooth and mellow time was had by all. We kind of ran out of gas and left before Heather could do her chicken dance, but hey we’ll double up on it next year!! 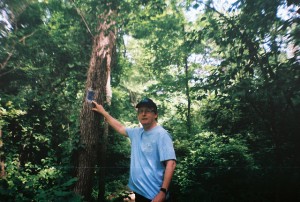 That is where I was standing Saturday morning. I took son up on Turkey Mountain. We took the blue trail, a short 1.5 mile loop. 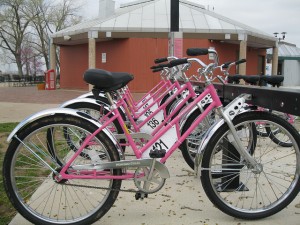 Pink is the color of the free bikes available on the River Parks in Tulsa. 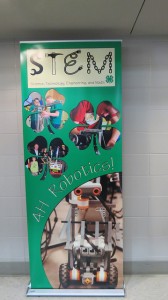 4H is an awesome organization. They are even tackling our country’s STEM (Science, Technology, Engineering, Mathematics)  manpower (and womanpower!) shortage. 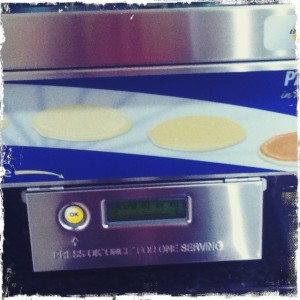 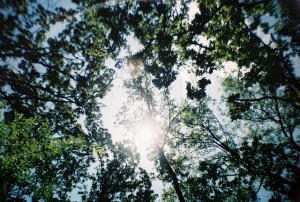 My favorite place, besides the beach which is a long way from where I live so it doesn’t really count, is Turkey Mountain in Tulsa. An urban wilderness. 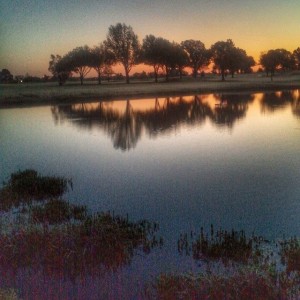 The weather has warmed up enough to where I am back running outside again instead of the dreaded treadmill. I took this shot at Tulsa’s Lafortune Park earlier this week. I’m really enjoying Spring. I hope that you are also. 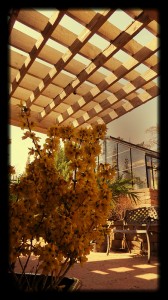 Well,I’ve been absent a couple days from bloggerville. you see it has been my birthday and so I’ve been spending time with the family letting them spoil me. Today we went to Tulsa’s Linnaeus teaching gardens at Woodward Park. I saw a lot of great sights and I loved this yellowish plant and the shadowplay on the ramada above. 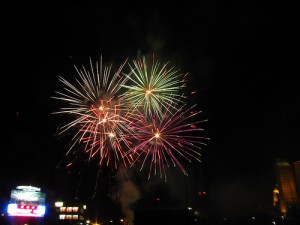 I was thinking blingy, but I couldn’t find sparkly blingy so I’m using fireworks. They are kind of sparkly. 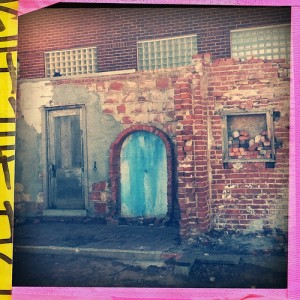 I have photographed this funky blue door on the outskirts of downtown Tulsa several times. I’ve seen several professional looking photo shoots also. I don’t know what is behind the door. I hope it is something cool. 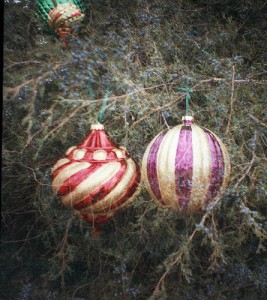 I dabble in lomography which is a fancy word for using toy cameras loaded with film.  We have family friends who decorated a juniper tree with bulbs. They were widely spaced so I put two of them together with a double exposure.

I found this last week last week during a lunchtime walk in an otherwise, down at the heels, but up and coming, funky neighborhood.

5.A Few of My Favorite Things 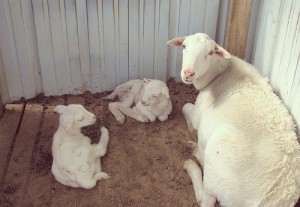 There is almost nothing cuter than newborn lambs. Sheep are cool.

This week’s prompts were challenging for me, which makes it fun! 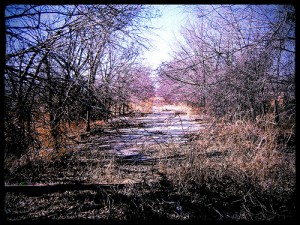 One of my obsessions is geocaching that is a sport where people hide caches out in various locations and post the GPS coordinates on geocaching.com. Others go find the caches and log both a paper log in the cache and the online cache page. Sometimes I end up in creepy places like this long abandoned roadway near Tulsa. I walked down this road about a mile to the cache. This looked like a great place to go missing. Of course, not a soul knew that I was out there. If something happened to me it might a while before somebody found me. 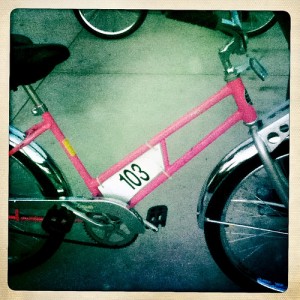 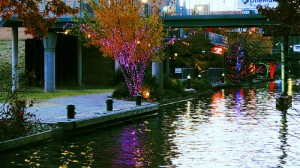 Christmas lights on Oklahoma City’s canal in the Bricktown area. 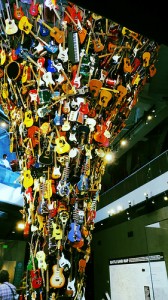 A guitar tower at Seattle’s Experience Music Project. Talk about overwhelming. That was EMP. 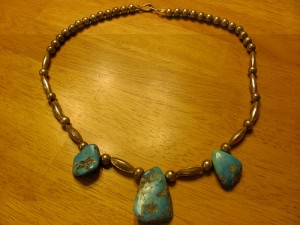 26,000+ photos on Flickr that I’ve posted and not one bracelet tag so I’m cheating. This was my mother’s turquoise and silver handcrafted necklaces. Mom is gone and Dad gave me her necklace. I remember the day way back when Dad gave it to her. It was a great day for both of them.

We are well into Fall and sliding into Winter. The days are still nice and some of the trees still have their leaves despite our stiff Oklahoma breezes. 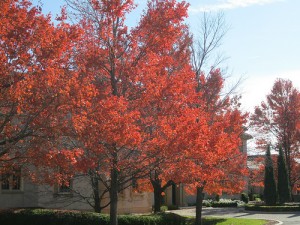 (At entrance to Tulsa’s Philbrook Museum of Art)

Daylight Savings Time has ended so the sun is setting at about 5:15 pm. I work until 6 so I get to see some great sunsets late in the day. 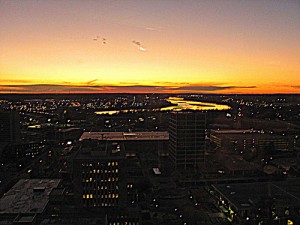 The Arkansas River reflecting the sky. A refinery is just to the left of the river. In the foreground is our county courthouse on the left and city county library on lower right.  I experimented with Picnick’s “HDRish” treatment to try and bring the buildings out of the blackness.

Have you tried any experiments lately?