Saturday was the 42nd running of the Tulsa Run. I have run twenty six of them, twenty three 15K’s and today I ran my third 5K.

It rained all day Friday and most of the night into the morning when my alarm went off at 5:15. I briefly considered not running but I have never ever skipped a race because of weather and today was not a day to start with that. So I got up and got dressed. By race time the rain had cleared out and the weather was perfect. Low 40’s, overcast, slight breeze. Time to roll.

So ran the race by trotting until I felt like walking and then resuming the trot when the spirit told me to run. I also stopped a lot to take photos of various things on the way such as the mural above. Tulsa has had an explosion of Murale Design the past few years. I think it is a nationwide thing from what I read and I love it.

And there was some graffiti on the route. This one is pretty decent.

Right across the street was this. It looks like somebody else has been messing with it. I understand that is a thing with graffiti as well, defacing it. Most graffiti does not age very well and is a form of vandalism.

We also passed an outdoor beer pub. What!! Why have I not heard of this one???

I love the plain outspoken voice of this sign. They were closed though.

And the VFW, their bar is now open to the public. Has been for years.

And we turned and headed downtown.

We passed this old beat up VW Van. 57 years old and they want a bunch of money for it. You could get this, paint it pink, purple, or yellow, with some flowers and peace signs. Tour the state and smoke marijuana. Nowadays in Oklahoma the cops are just going to yawn if they see you smoking weed, as long as you are not driving.

Another mural, for a coffee shop. Very apt I think.

And on down Route 66 and I stopped to say hello to Buck Atom.

And across the street to the Meadow Gold sign.

Kept on, keeping on to the west and turned the corner north onto Boston Avenue and ran under the big US Flag put up by the Tulsa Fire Department. Salud Guys/Gals!! I love this.

And headed a few hundred yards to the finish line.

Here is my official by goodness Finish Line Photo. One of these days I am going to get a photo of me running where it actually looks like I am running. Today was not that day.

Finished really slow, but vertically. Grabbed a water, a sack containing a sandwich and chips, accepted a kit kat bar from a volunteer and then stole another from the table and got barked at, so I stole a third one, and got glared at. Sorry, not sorry. Made my way to my car and drove home.

So years past after cleaning up I would have a couple beers and a couple snickers bars. Nowdays, morning beer drinking is not near as much fun as it used to be and I decided you know, I want a Braums Chocolate Milkshake so I had that. 24 grames of protein, right!? Powerfood

So that’s a wrap folks. I’m linking with Our World Tuesday. Come check it out!!

Fall came in with a bang yesterday in Tulsa. Cold, wind, rain here it came. I had to do that most of miserable of chores in cold weather.

Gassing up the car. Nothing like it in a cold wet rain, even with a canopy. When I was a kid we lived in a little town in Arizona where we heated the house with a big huge fireplace that was outfitted with blowers and vents. My brother and I had to saw the logs, split, and stack them and then haul enough wood to the house every day to feed the fireplace. To this day, fireplaces are not romantic to me, I hate them. Anyway, I am off topic.

So I gassed up the care shivering shaking. Took all of about a minute or two. I spent more time taking photos than pumping the gas so don’t feel sorry for me. Not that you were of course.

Something about rain makes it extremely photogenic.

And since today was my day off I had to get some adult malted beverage at the liquor store. Oklahoma finally joined the 21st century last year. We can get a wide variety of cold beer now. This place had a beverage chiller for the beer and wine not in their refrigerators. Very cool. You just put your cans or bottles in and in five minutes they are basically ice cold.

Tomorrow I am running the Tulsa Run. I ran the 15K version twenty four times. Nowadays I will be running the 5K event for the third time. I always look forward to the Lululemon girls and their signs. The above is the only photo I have that ever went viral. I posted it on facebook after a race and it got shared over a 100,000 times. I hope it quits raining today. I have cold, wet weather running gear so I’m prepared one way or the other. 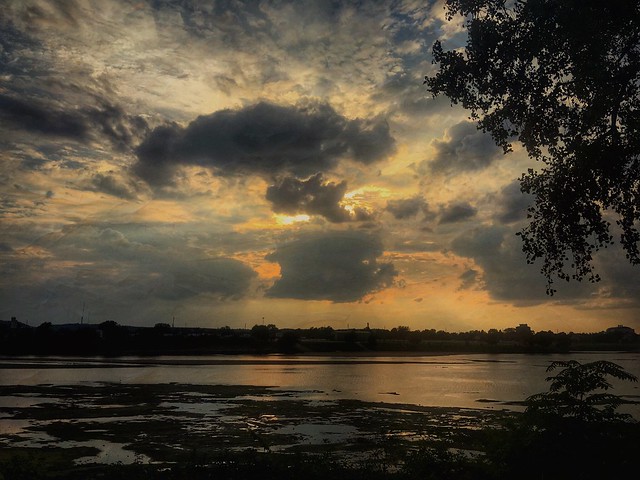 Its late September and that means that I am spending a lot of time every week on the River Parks trails along the Arkansas River training for the Tulsa Run 15K that occurs in late October. This is the perfect time to run where we still have daylight savings time and the weather is beginning to cool. Last night I ran eight miles and it went splendidly.  I have decided that I am going to sign up for the Route 66 Half Marathon which runs in November.

And the skies are a lot more colorful this time of year. I took this in the street in front of my home. 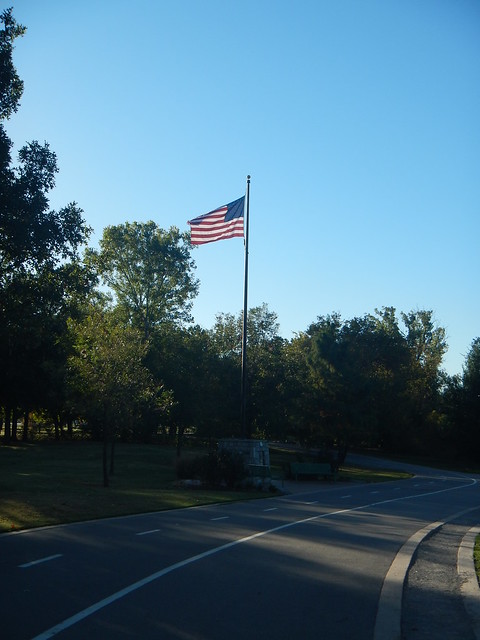 Saturday I made my last long run before the Tulsa Run 15K coming up this next weekend. My training is not going like I thought it would. 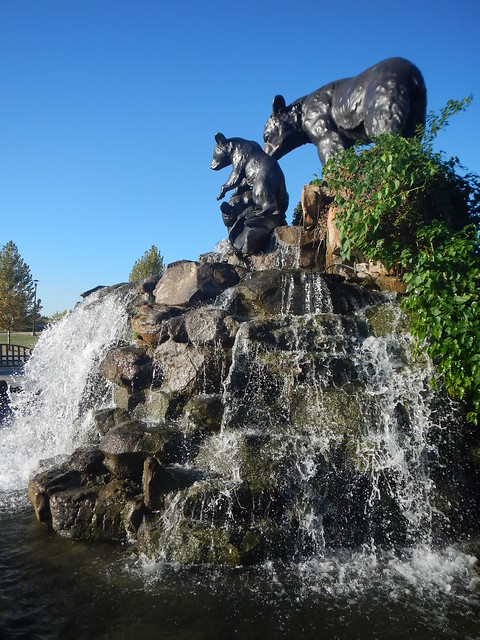 Basically I have been running only one day a week because i have a sore back every morning. Weekday mornings is generally the balance of my training where I do my resistance traiining (essential to successful running) and my shorter runs.

My back is killing me in the morning in one particular spot about midway down my left side.  And it disappears about 20 minutes after I wake up in the morning. No, the bed is not uncomfortable but the pain is not quite excruciating in the morning. 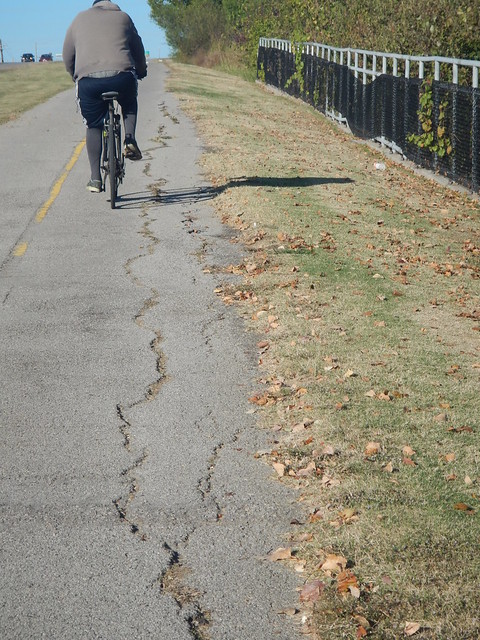 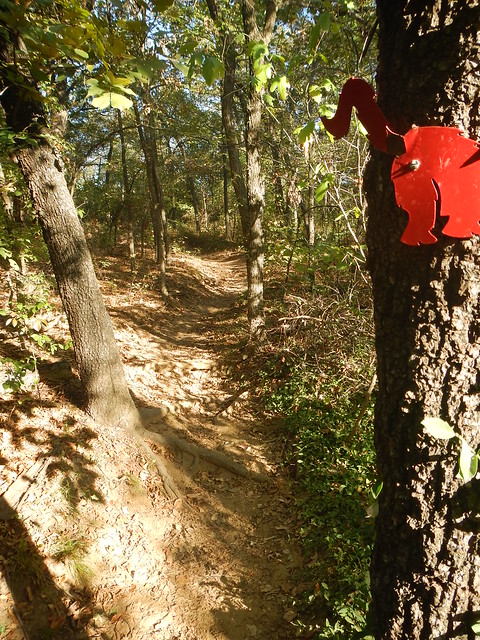 So I get up and make coffee and read the paper and check up on what is going on online. 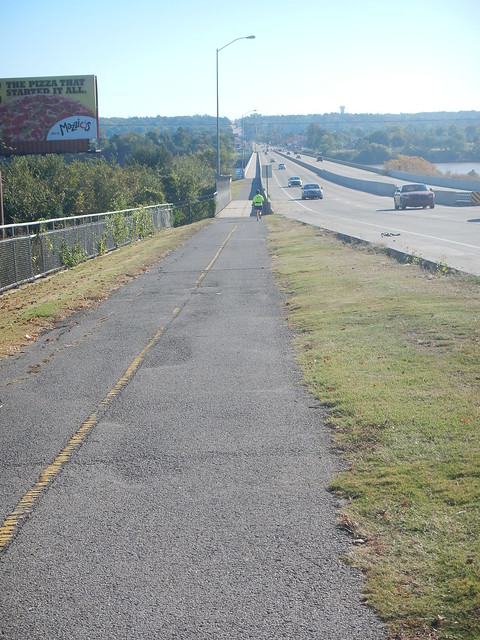 So anyway, the Tulsa Run is 15K and I’ve only trained about 11. Things will be okay though. I know how to stretch things out. I first ran the Tulsa Run in 1994 and ran it every year through 2014. Last year I injured a knee and so I walked the 5K but I’m running the 15K again. It will be my 22nd time. 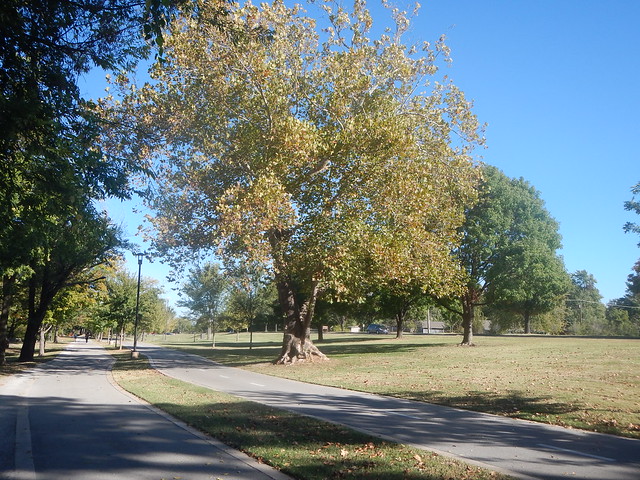 How about you? I bet you know how to stretch things when you have to. 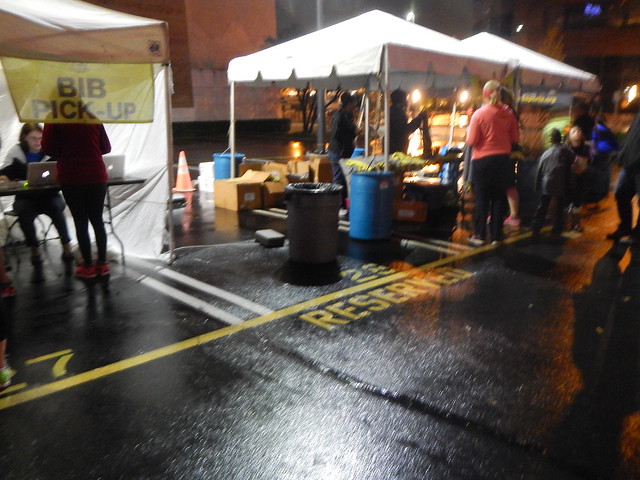 My Big run every year that I look forward to is the Tulsa Run 15K. I have run it every year since 1994 when it was the first race I ever entered. This year I did the 5K version because I am still in rehab on my knee from a fall that I had in early September. I felt bad about it for about five seconds then my motto kicked in. The motto is “If you can’t do what you want, then do what you can.” So I can walk a 5K, better than sitting on your butt is what I say. Sitting is the new smoking is my new motto. 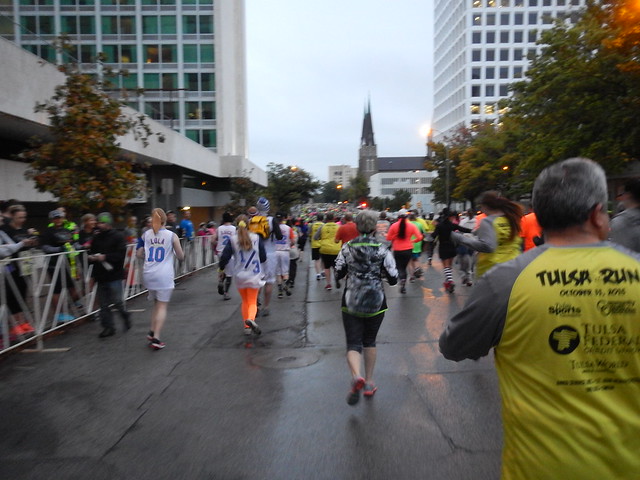 The downside is that the 5K race starts over an hour before the 15K so I had a little bit less time to get ready. You see my office building is right by the start so historically I am able to get to the office. Make some coffee, check my email and update facebook, do some blogging, and then 10 minutes before the race head downstairs.

Since my leg was sore I had no intention of run/walking. So I made a video of the walk up to the start line. Generally in the 15K it takes about five minutes to get to the start. Psychologically passing people from start to finish. So I started at the back in this race and stayed pretty much in the back. 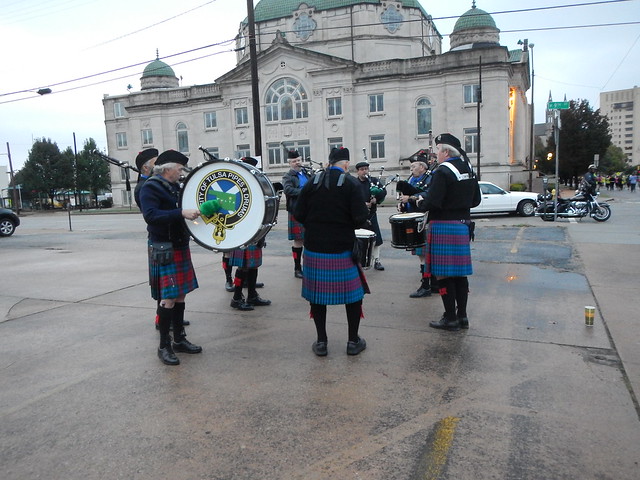 The music community has historically supported the Tulsa Run and I love hearing them. We generally have bagpipers, rockers, rappers, and sometimes cheerleaders. I guess the Christian bands sleep in late because I hear lots of taped Praise and Worship music but not that many performers. 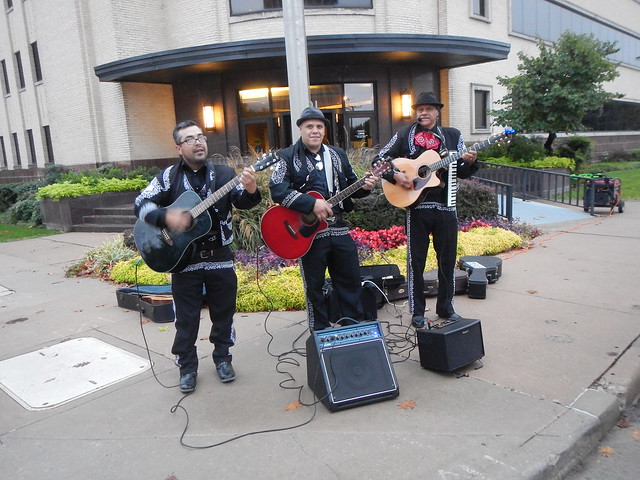 These guys have been here the past several years playing Hispanic music. They are pretty darn good. 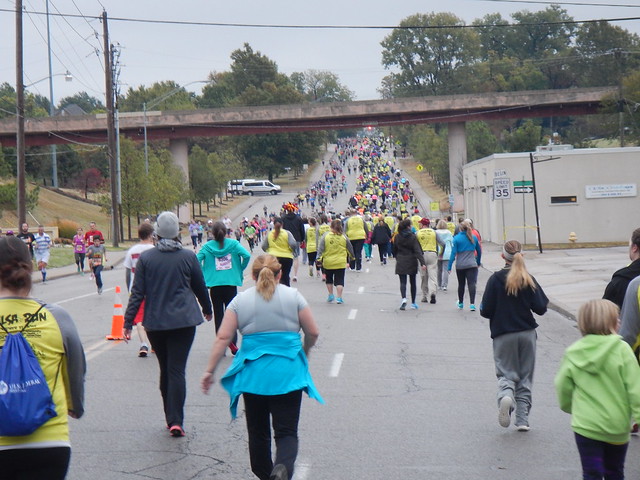 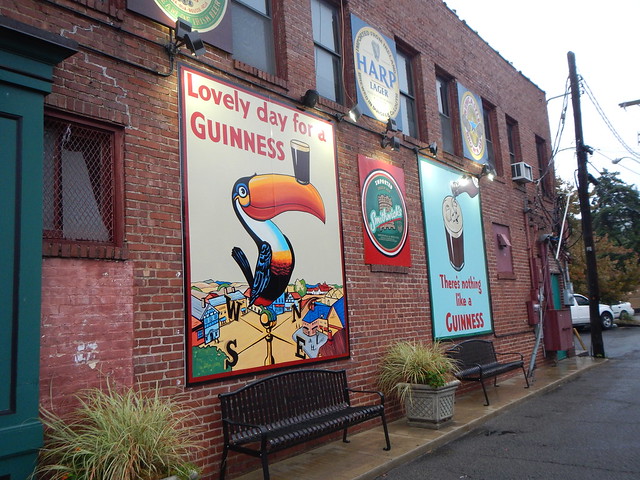 So I finally get down the hill, and then up the hill and turn around and head back down the hill again. Hey time for a Guiness maybe? No, they were closed. 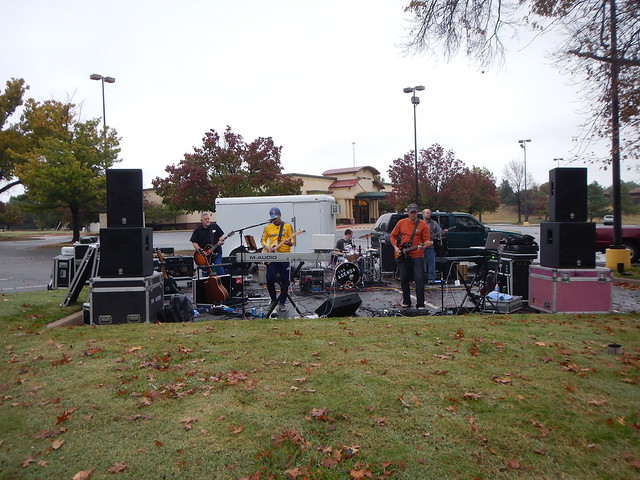 Make the turn at the Fertility Clinic on Boston and another rock group. 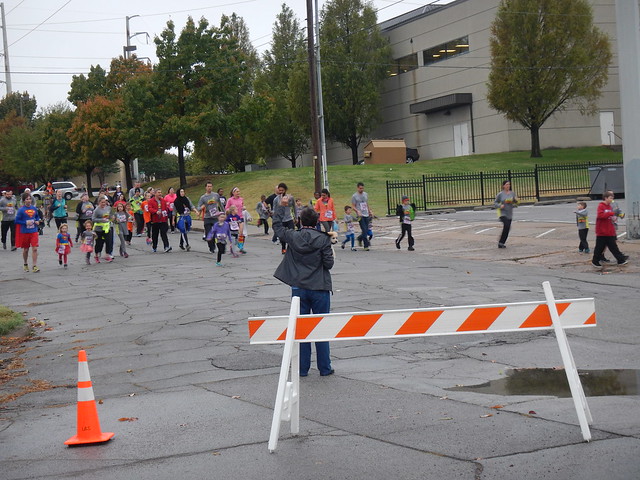 Headed up the hill and hey, who are these cheaters coming on the side. I think they are the fun runners. Lots of kids hauling butt is what they were. Nice to seeing kids running is what I say. 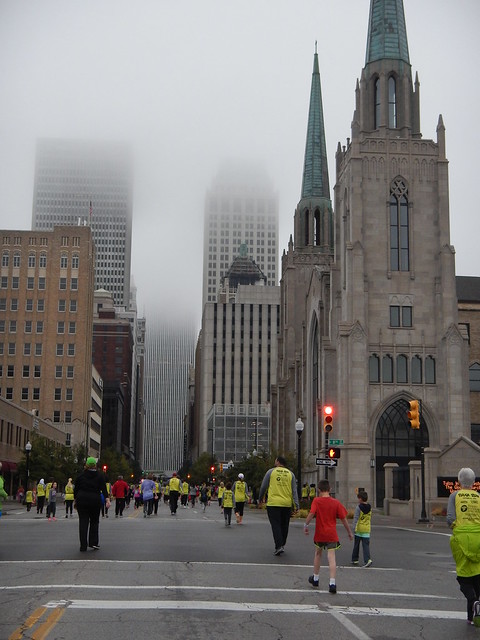 And then here comes the back of the packers in the 5k headed towards to art deco canyon of Boston Avenue. So I got a nice technical long sleeve shirt, a bottle of water, and little medal and a care package containing cheese spread, chips, animal crackers,  a tiny twix bar, and a hand wipe.  Uhhhh, thanks, where’s the beer, guys? Where are the snickers bar? Oh well, times change and so does this race.  Hey, I don’t care, I love this race. I’ll be back.

22nd Tulsa Run in the books. I’m looking forward to running the 15K next year.

Thanks to the race sponsors, the race director and his helper, and the army of volunteers that it takes to put something like this on.