Here is Lizzie doing what she does best, napping. She was impatient with us as we put a Christmas quilt on the bed. We were delaying her nap. You can tell she is kind of grumpy about it.

I vacuumed the house yesterday. When I found cat toys underneath furniture I’d vacuum off the dust bunny’s and put them in this tray. She always like to see her toys again. But then she loses them. She’s napping here using a coaster for a pillow. Our vet told us she needed to go on a diet. Only two scoops of kibble per day. She thinks I need to use a bigger scoop.

Here’s LJ chilling. He’s happy, the vet said he could have all the food he wants. He’s kind of old and has kidney problems and he’s loving his new food. He has a lot more energy now.

Here’s LJ with a Hipstamatic Filter. I filters of all types. I unashamedly and unembarrassingly use a lot of them.

That’s it for this week. Check out Saturday’s Critters!

And LJ, Lizzies elderly brother. We are temporarily without dogs but we are getting one mid December. Son Logan said that we need to “restore the natural order of things.” He thinks the cats are getting way to comfortable without a dog to keep them in line.

I’m linking with Saturday’s Critters. Check it out.

I spotted this Great Egret on the Arkansas River during a recent bicycle ride.

This is another one. He was standing still and got tired of waiting on me. I was lucky to catch him in flight.

Our hummingbird feeder is getting regular visits now. Problem is that wasps and hornets are also visiting and they don’t like hummingbirds. So I’m trying to figure out what to do about it. I hate to kill native pollinators.

Lizzie thinks we got this tray in the living room for her. She thinks everything in the house is for her!

And our little Pomeranian, Rascal. He is very sick with cancer in one lung, congestive heart failure, and other issues. Vet said that he doesn’t know he is sick so just love every moment we have together with him and we are pumping full of meds and supplements. The weather has cooled a bit so we are taking him on short walks. He sure does love his outings. They wipe him the rest of the day but he’s happy. We are doing our best for him to live his best life.

I’m linking with Eileen’s Saturday’s Critters. Go check it out!!

Big excitement this week is that my trailcam captured a raccoon very early Monday morning. I don’t know if it is a Rocky or a Racquel. If you have any clues let me know.

And a short ten second video. I haven’t seen him since so I guess he was not impressed with what we had on offer on the patio which was nothing.

Also exciting is that Rascal our pomeranian graduated from physical therapy. He got injured in November and has been getting acupuncture and PT since then. The progress really has been remarkable. I thought we would never be able to walk him again but now we do it every day. Just a mile or so because he is still building up strength and stamina. The staff posed him in a graduation cap and he loved it. He is such a diva.

I saw Lizzie grooming herself the other day and getting big mouthfuls of fur so Heather got out the grooming tool. Lizzie loved it. We are trying to avoid hairballs.

A robin all puffed up in this fuzzy shot to try and keep warm.

A bird in our birdbath.

A female cardinal at the feeder.

And a bright colored male.

And both of them in this ten second video.

That’s about it for critterworld in our neck of the woods. I’m linking with Eileen’s Saturday’s Critters. Come join in!!

Here’s LJ our stately elderly, wild eyed cat. Surveying what is going on in the house.

And Lizzie, our plump little lady, has finally learned that the fire feels good. Took her a while. She’s still kind of confused. We don’t typically have the fire during the day but she goes and lays down in front of the fireplace with a look of not understanding why it’s not warm.

Here she is warming up her other side.

And LJ and Lizzie, cheek to cheek so to speak.

My new trailcam, still messing with it. I have it set so that when it trips it takes a still photo and ten seconds of video. I ended up with hundreds of little videos. Wading through all of them is drudgery.

Most of them were of starlings fighting each other at the suit feeder. I got tired of that really quick.

So I’m still trying to figure it out. I think I’m going to do mainly photos. Lots faster to go through.

That’s about all on our animal front these days.

I’m linking with Eileen’s Saturday’s Critters. Go check it out!

Our cat Lizzie has always liked Christmas. In particular the trees. She used to climb them but she is too fat do that now. Still when we put them up she shows up and gives them a good sniffing.

She has to check out fake evergreen closely.

My wife bought new cushions for the chairs in the front room where the big tree is. Lizzie loves them. She would rather lean on something than lay on it.

Time for a nap. I’m wondering if she is dreaming of sugar plums.

I am linking with Eileen’s Weekend Critters. Come join in!

Lizzie the kitten has to check out every single new thing that comes into the house. She really liked this ribbon that we had.

She has to sniff it thoroughly

And jab at it a few times to check out if it can be played with.

LJ is a little bit older. He gets his Christmas on by laying on stuff.

Linking with Our World Tuesday and Ruby Tuesday 2. Go check them out, lots of fun and great photos await you.

This is Lizzie our sweet little rescue kitten. I know that three year old cats are not kittens but that is what we call her. Somebody through her the window in a parking lot. She’s sweet but she doesn’t like to be held unless she is in the mood. And she is never in the mood.

During a yawn she goes into scary rattlesnake cat mode.

This past weekend was the annual Fall Fest for the Tulsa Area Geocachers (“TAG”) at Lake Bixhoma. Usually it is a multi day affair with camping and catered meals but this year it was an abbreviated one day affair. No camping, bring your own food, etc. I was busy with flooring and wall repair contractors so I was very late getting out there.

So here is proof that I can be social. I’m on the far left with two other geocachers. Yep, there was a cache on that dock.

In addition to meeting people, the big thing at Fall Fest is all the temporary geocacaches that people put out. There are typically dozens of them. I only saw a few. You will never see caches like this “in the wild” because they would be muggled in no time. (Muggles are people who are not geocachers, muggling is vandalism by muggles.)

Many of them involve puzzles or riddles to solve. Me and another guy had worked on this one for a while and the young man showed up and solved it in no time.

This was a pinball type cache where you had to notice numbers that were revealed as the ball fell down to solve a code.

And there were some water caches you could use a kayak to go find it. It was cold so I declined.

And then you had some more straightforward ones that even I could find.

I didn’t join the big group, I said hello to a few people and then found a trail around the lake. Social Distancing!

It was cold and overcast but still pretty in my book.

Bits of Fall Color were present. And then I went home!!

Come to find out that while I was off at the lake, the flooring guys knocked off early and my wife reclaimed our living room and master bedroom. We had been living upstairs during the time they were working downstairs and it was nice to have a couple rooms back. Our dogs and cats were highly stressed and they were glad to have Saturday afternoon and Sunday without being locked up with all the banging and other noises going on.

Abby loves the contractors. They give her belly rubs in the morning and evening but she slept almost all day Sunday.

That’s about it this weekend. 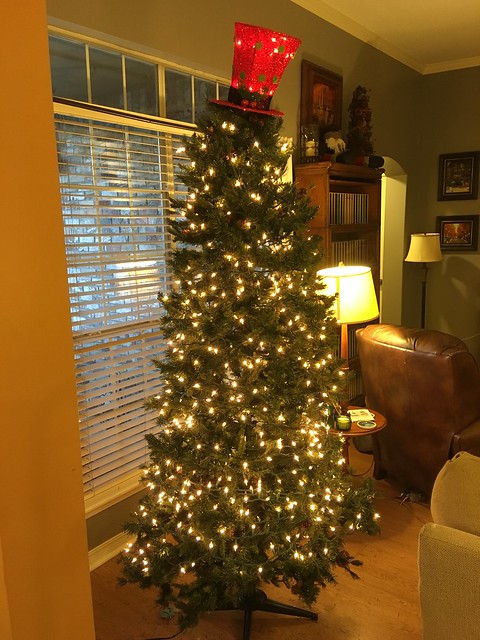 Well we are running behind schedule on Christmas this year. This is the tree. Heather put on the Topper just to keep me from putting on the Dallas Cowboy Star. I strung the lights. Oh well, we have a lot going on in our family right now. Believe me. Buy me a beer and I’ll tell you about it. Buy me three or four and you will hear all of it but you will have to drive me home. 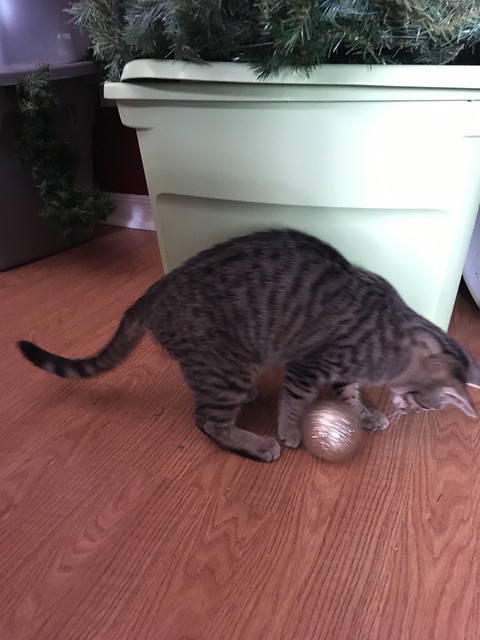 Oh well, what keeps it fun is that Lizzie the kitten is enjoying the dickens out of Christmas. 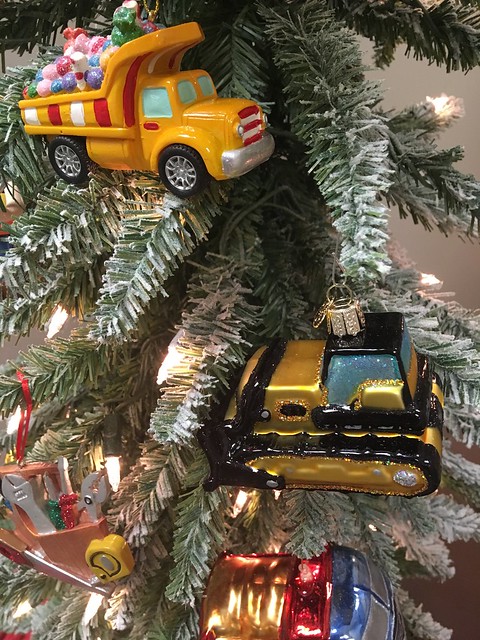 And at work, the Large Projects Group that I work in has a tree. It was a woman engineer that raised the cash from us deadbeat men engineers and bought ornaments and the tree. I think she did a great job. I love all the construction equipment ornaments. 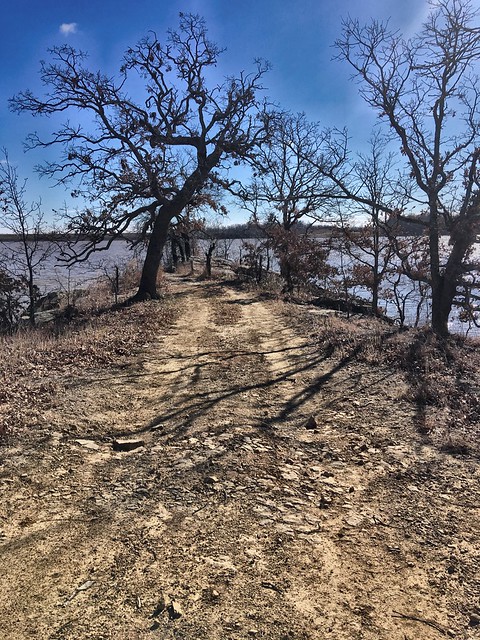 On a cold windy day last week I went for some noon time geocaching out on this remote lake. I froze my butt off and didn’t find the cache but I loved the hunt. In case you need to dispose of a body, I found a couple really good spots!! 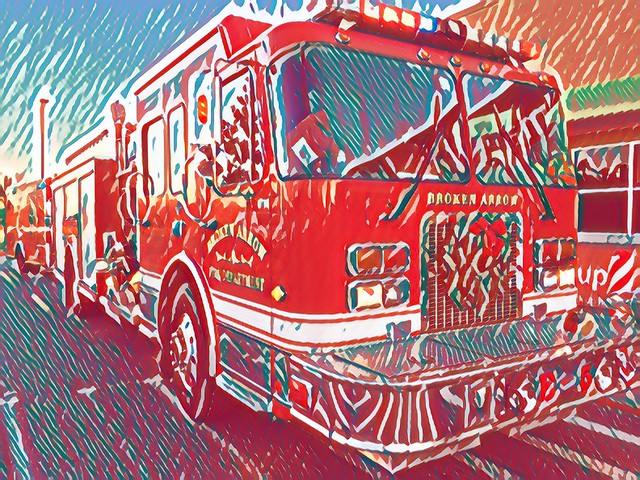 Son Logan is working at a Neighborhood Walmart these days. He is proud of his job and seems to be doing well. We went by there the other day (he wasn’t working) to get a few things and then all the customers were ordered to evacuate immediately, so we did. And I fulfilled my blogger journalistic duty by taking a photo of the fire engine and fulfilled my artistic duty by using prisma to pretty it up a little bit. I don’t think there was any property damage nor was anybody hurt.